Earth-Size Planet to Be Found in Outer Solar System 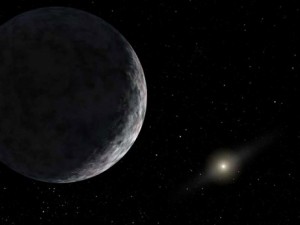 A planet roughly the size of Earth could be tracing a vast, elliptical orbit at the outer edge of our solar system—and astronomers in Japan think they know where to find it.

The presence of this unnamed body has been suggested before, noted Tadashi Mukai, a professor at Kobe University’s department of earth and planetary sciences.

«We have been able to identify more than 1,100 objects beyond Neptune since 1992, and a huge number of objects are showing large orbital eccentricities and elliptical orbits,» Mukai said.

This suggests that a body with sizeable mass must be influencing the movement of these objects by exerting a gravitational pull.

But the extreme distance and unusual orbit of the elusive «Planet X» have made it difficult to spot even with the most advanced telescopes.

In a paper appearing in an upcoming issue of the Astronomical Journal, Mukai and colleagues propose that other researchers have simply been looking in the wrong place.

«We have reached our conclusions from simulations that explain the orbital elements,» Mukai said.

«We are now looking in places that we have not looked before, and I think we will be able to see the planet within the next five or ten years.»

The eight known planets in our solar system are on very similar elliptical orbits and are all almost within the ecliptic plane, the geometric plane that roughly describes Earth’s orbit around the sun.

«Most surveys [looking for Planet X] are concentrated toward the ecliptic plane, since that is where most solar system objects concentrate,» said Mark Sykes, director of the Planetary Science Institute in Tucson, Arizona.

The new models, however, suggest that Planet X is circling the sun on a 20 to 40 degree angle relative to the ecliptic plane.

«The discovery of new planets with higher inclinations, like [the dwarf planet] Eris, encourages more searches of those regions,» Sykes said. (What is a dwarf planet?)

Despite its size, the planet will probably have a far lower density than Earth, the researchers think.

Earth has iron at its core, but if Planet X formed in the outer reaches of the solar system, it will have stone at its center and a mantle of ice.

The surface of the planet will probably be similar to that of Pluto—covered with ice made of water, ammonia, or methane with a surface temperature between -423.7 and -405.7 degrees Fahrenheit (-253.1 and -243.1 degrees Celsius).

Alternatively, if it is a «rogue» planet that took shape in the inner reaches of the solar system, the body could be mostly rock with a metallic core and its primordial atmosphere frozen on its surface.

Planet X’s strange, oblong orbit means that it would take the object about a thousand years to orbit the sun, the researchers say, which could be one reason no one has spotted it yet.

What’s more, the body’s closest approach would bring it only within 80 astronomical units (AUs) of the sun, while its furthest distance would be about 200 AUs. (One AU equals the distance between Earth and the sun, about 93 million miles or 150 million kilometers.)

The most distant known planet, Neptune, is about 30 AUs during its closest approach.

The idea of looking at higher angles than the known planets’ orbits raises the likelihood that more distant bodies will be found, said Sykes, of the Planetary Science Institute.

«If this object is discovered, it would help us understand how many others there might be out there,» Sykes said. «It would be a fascinating object to visit.»

Its discovery would also cause a major stir in the astronomical world, he said.

Like Pluto, the new body would not dominate its orbit and so would not be classified as a planet under the recently changed definition of the International Astronomical Union.

But before that controversy can erupt anew, researchers have to actually find Planet X.

Mukai and colleagues are hopeful that the Pan-STARRS mission slated to start in 2009 will do the job.

This multi-facility collaboration being led by the University of Hawaii will pool data from four telescopes based in Hawaii that will constantly scan the skies for asteroids, Mukai said.

When the telescopes are operational, there is a good possibility that they will make unprecedented discoveries about the most distant parts of our solar system.

«I agree that there is the possibility of other large planetoids out there» in addition to Planet X, he said. «We certainly cannot discount that possibility.»

Free Email News Updates
Sign up for our Inside National Geographic newsletter. Every two weeks we’ll send you our top stories and pictures (see sample).